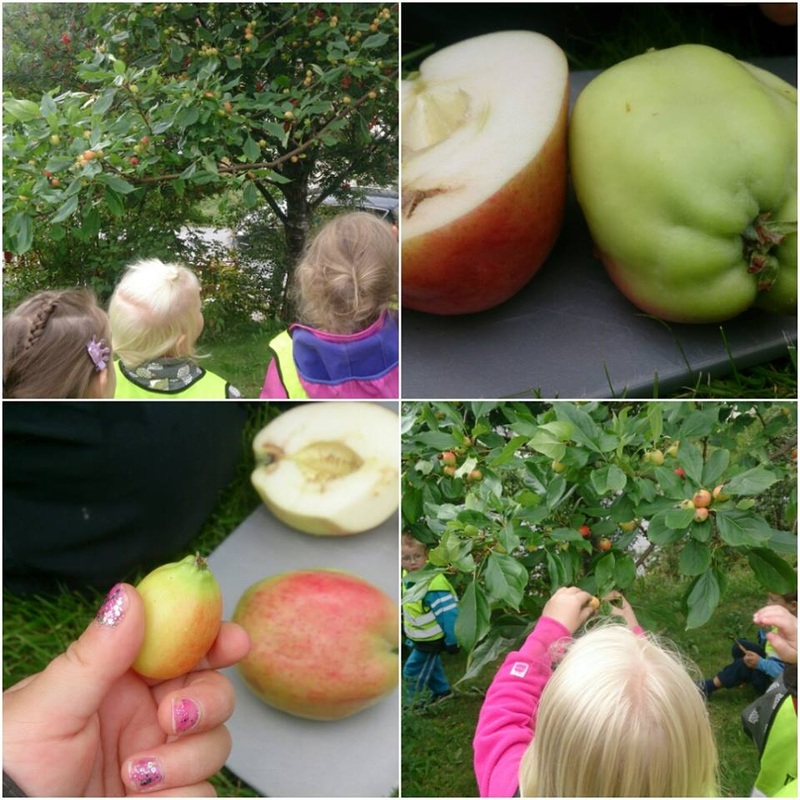 Norwegian children picking the apples in the orchard.
Harkwell Labels Sales M﻿anager Barry Halliday has been helping his son Oliver James Halliday  with a very special project this Autumn.

Oliver Halliday moved to Norway 4 years ago to work within a kindergarten in Lillehammer, Norway. Whilst working at the Kindergarten in Lillehammer he found himself surrounded by apples and began to think how special it would be to incorporate the apples in to making Eple Juice with the children. The apple making was such a success that he decided to take his idea to another school in Skien where he now lives.

Over a long period, the children gathered apples from the gardens in the area by Moflata in Skien. The harvest resulted in a huge party on Thursday 2 October, where children themselves attended making the home made apple juice along with apple pies.

The process of making apple puree was divided into several processes, and the children who took part in everything.
First, the apples were washed before being cut up and mashed. Then the juice was pressed out before bottling with the  kindergartens own label.

The kindergarten held a competition for the children to design an image for the label.  The winning design was by Oda Andrea Jensen. The image was then sent to Barry Halliday at Harkwell Labels Ltd. where the design was finalised  by it’s studio team. The printed labels were then transported to Norway and presented to the school by Jane Halliday (Barry’s wife).

“I’ve just thought about apples for two months now, so it feels good to be up and running”, says assistant Oliver James Halliday – “This is a time when many of the children are new to the Kindergarten, so this helps them socially”, tells Tiochta , who credits the success of the event to the assistant Oliver Halliday .

Oliver Halliday discovered that there was a profusion of apples in the area and had previously made a ​​similar project with kindergarten in Lillehammer : “I saw how fun it was for kids then, and hoped that we could achieve something similar here” , he says enthusiastically.  Ingeborg Skifjeld and Eirik Hyni Kallestad both agree that this has been the funniest day we have had in the nursery for a long time.

Parents were invited to the event where Apple pressing process began in the early morning and kept going until late in the day.

Please click on the link below for the full story that made the Varden Newspaper in Norway.